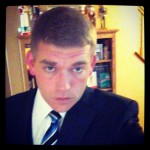 Dear Rob,
How did the political parties come to be represented by a Donkey and Elephant?

Great Question Paul,
First came the Donkey. Few know this since we only see Andrew Jackson’s face on the $20 bill, but in actuality he was a cloven hoofed demon spawn with three fingers on each hand bearing the mark of the beast. 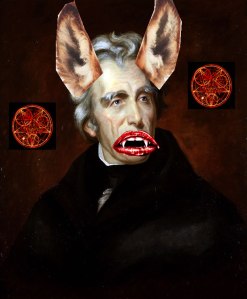 Jackson’s parents, like many of the time, were Satan worshipers and birthed Jackson from the depths of hell. The womb on this mortal plane was a pentagram made out of…you guessed it…Donkey Blood.

When Jackson would address the nation, the six people that would gather on the white house lawn, his handlers (literally) would take great care to pin his antenna ears into the back of his jacket, place gloves on his hands and put him behind an extra large podium to hide his horrific deformities. Sadly though, they could never control his braying and whinnies when speaking.

This being a time when people were stupid and unworldly, Nast met his demise when showing a picture of his first Blue Whale. The beast’s penis size caused an orgasm so fierce and long that Nast ejaculated with the force of a million suns and his head caved into his shoulders.

Dear Rob,
Why do they call them chicken fingers? Chickens don’t have fingers, just feet.

Great Question Rita,
The chicken finger was invented by noted biologist and McDonald’s Chef Adolf Hister. A man small in stature, but with big ideas who seemingly landed on our shores out of nowhere at the close of WWII, Hister sold McDonald’s on the need to diversify their menu in the late 60’s.

Always looking for cheaper “meat” in their products, McDonald’s never questioned how Hister one day came across 4 million people fingers.

McDonald’s ran a pilot at a few of their chains for the new breaded delight. When people fingers were introduced the public didn’t respond well. However, once the company decided to grind the fingers up into a less pointed formation the idea began to take on. People Fingers sold like gangbusters in states like New Jersey and Hawaii, but broader adoption was simply not taking hold.

Hister and the company then decided that since everyone hates Chickens, that no one would balk balk at eating their parts congealed into a finger like form.

They were originally called Chicken Penis and sold like gangbusters especially in test markets like San Francisco. Sadly a lawsuit was drawn up against McDonald’s in 1967 for copyright infringement by the Beatle’s who intended to use this as the original name for their album Abbey Road.

An international court decided the best alternative would be to let neither company use the catchy chicken penis moniker.

And thus McDonald’s decided to use Chicken Fingers until the more popular McNugget was introduced in the 1980s. But don’t be fooled, those are actually delicious People McNuggets.

Dear Rob,
Why are boys stupid and even though they’re stupid, why do we girls like them so much?

Great Question Lois,
To answer this we need to go back to man’s beginnings. As science tells us, man was on the Earth first until he fashioned the first woman from one of his ribs, eye shadow, and a pair of Jimmy Chu shoes.

Once woman was created, man saw this creation was good. Sadly though he only had so many ribs. In a moment of inspiration, the man decided to awkwardly and quickly thrust his genitals in the woman’s direction. This repulsed the woman, but she decided to to keep watching since the Home and Garden Network wouldn’t come around for about 4 million more….excuse me…5000 more years…and she had to do something.

Eventually man and woman figured out if they thrust their genitals in unison they would eventually create more humans and man would be able to keep a firm torso instead of an upper half that looked like Jabba the Hutt.

Once the first baby was born, women were instantly enamored with the concept of new life and a continuing circle of humanity who one day write poetry, see the stars and develop Pinterest. The man looked at the small mewling creature and tried to hit it with a rock. This angered the woman, so she took the baby away and told the man to wait in a nearby cave until she wanted another baby.

So there you have it Lois. Men are stupid and merely tolerate us so we can make more babies (hopefully one day all female).