Dear Rob,
What can happen if I remove the “Do No Remove” tag from my mattress? Why is it illegal?

Great Question Paul,
The only thing that can happen to you if you remove the “Do Not Remove” tag from the mattress is a lovely 6 month stay in Guantanamo Bay. Today all mattresses are equipped with an RFID tag that alerts the NSA of this “suspected” terroristical removal of American spirit from the very invention that made this country great.

Once the NSA “tourist agents” arrive at your house you will be given a fair trial en route to GITMO with a ceremonial black bag over your head so you can’t give the general…I mean judge sarcastic eye rolls. Once you’re settled into GITMO you will be given a mattress made completely of tags. If you remove one of these tags however, you will be shot in the face. 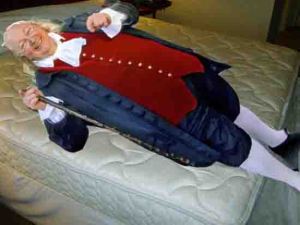 The origin of the “Do Not Remove” tag goes back to the founding Fathers. Ben Franklin’s penis was fire hose of gushing syphilitic puss. No one during the constitutional convention wanted to sit on the same wooden chair as Franklin, much less lay in “his yellow pond of whore delight” when he was done sleeping for the evening.

Since Franklin was becoming senile, he would often take slumber in whatever bed he pleased or the first place he saw an exposed whole each evening (female, male or Washington), so as such every mattress in Philadelphia had to be tagged by the end of the convention. In a desperate hope that “Franklin Penis” would not spread throughout the country, Franklin’s body was cremated atop a mountain of mattresses that some say gave the moon “Franklin Penis” disease. This is why the moon sometimes has a yellowish hue.

So there you have it. Removal of mattress tags could get you shot in the face because we must never forget the sacrifice Philadelphia whores made to start this great country.

Dear Mr. Patey,
I would like to know if you can let me know if they still make a car called a Granada?

Great Question Cindy,
And thank you for the respectful salutations, though Prince Robert his Holiness of Knowledge would suffice.

1) It was shaped in a way to defy all known laws of aerodynamics. There was a belief for a time that the wind burn caused from this horrendous piece of shit was actually sucking air from the arctic circle and killing penguins.

2) High school boys who were high as a kite off whippets and shitty bags of weed could break into the fuse box in less than ten seconds and effectively make the Grenada a death wagon with no working lights, horn or steering – essentially an engine of death for any moron that would still drive the car in this condition.

3) As the car aged it admitted a pheromone that would attract deer. Not living deer, necrotic deer, zombie deer. Often this car would have two or three dead deer on top. In New Jersey, where I grew up all Grenada deer were to be placed ceremoniously on the door steps of residents in Kendall Park New Jersey. This law was enacted because Governor Thomas Kane was a dick and had stock in Chevrolet.

4) Unlike Honda Preludes, or Buick Park Avenues, the Grenada made for a horrible sundae base. Also if you ate any of the whip cream off a Grenada you would bleed out of your eyeballs for a week while professing to see God’s taint.

Dear Rob,
Your responses have been a wealth of information that educate the masses. I’m sure it’s only a matter of time for there to be a book compilation and thereafter movie adaptation. If so, who would play you and might there be a cameo opportunity for at least one loyal reader?

Great Question Lois,
After my last experience with Hollywood and their interest in my graphic novel Average Joe, with art by the amazingly talented Stephen Andrade (coming in early 2014), I will be wary once they come scratching at my door again.

Creative control will be my watchword and the Life of Rob will be a generational epic with the #ASKROB years probably at the climax if we’re looking at this from the Freytag pyramid structure.

Young Rob ages birth to 3 will be played by Mark Kate Olsen since she resembles my brittle bone structure upon exiting the womb.

3 – 4 1/2 – That’s you Lois, the perfect height to represent me during those years. We’ll simply CGI the hair blonde

The book will be ghost written by Salmon Rushdie with a forward by Shel Silverstein.