In a span of comic book movie casting news, we’ve had public uproar over Ben Affleck being cast as Batman, while Vin Diesel as pretty much anyone they can think of (but we all know he’ll be Groot in GOTG) has gotten nothing but applause.

My question is: what is the alchemy of “choice casting” for these roles? Is it an exact science, or merely a case of “right role/right person/right moment in the zeitgeist?”

Great Question Leo,
And it warms my heart to see there are some in the world untainted by the true machinations of the Hollywood spin cycle.

Q Scores, Twitter mentions and revenue modeling is what’s deciding the fate of entertainment or any media you consume Leo. 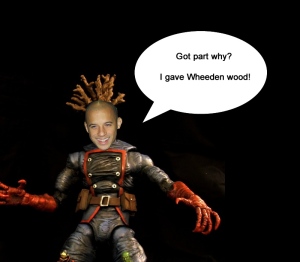 The “comic” fanbase is pitifully small these days in the grand scheme of things, choices are not made to satiate our rabid fanboy thirst. We are a small percentage string, the choices are made on those actors who cut across the right demographics that can help sell whatever shit is sponsoring this very special entertainment moment.

These are not the ramblings of an insane madman, I have seen it in action, it’s all about who you know, who you can get in front of, and who think you are most marketable.

Even with my myopic media presence I’m forced to make a choice each week on what readers want to know about. I turn a blind eye to many a quality book so I can ensure my article resonates with the broadest spectrum of fans possible. I would love to give more lip service to more books, but ultimately time forces my hand and many go unnoticed as a result. My model is not revenue based since I don’t get paid, but if I did get paid I too would have to eventually pay service to those books that would generate the most clicks which translates directly to revenue.

Only the ungodly filthy rich can act with any level of purity, because that clear liquid is sweat from the back of their less than pure revenue slave.

Sorry man, Zeitgeist ain’t it – the mass metrics of saturation and spend is where all the decisions are made.

What is the exact number of days that you can wear the same pair of jeans without washing them?

Great Question Linh,
The exact number of days one can wear jeans is in direct proportion with the company one keeps.

Allow me to draw you a scenario. In college where, weed, Marlboro’s and Beast Ice Kegs are part of the food pyramid, your jeans can go through quite a few wearings without meeting mother earth’s saliva and soap. Why? Because all that shit reeks, well beyond the order of your nasty pants and two of the three obliterate the ole’ factory ole’ factory.

Once we enter big boy time, get those jeans in the wash after they’ve been on your body 7 or 8 hours. The odors of middle age flatulence and skin decay are still not as powerful as the aforementioned collegiate concoction. You can afford the extra pairs of jeans now and the washing machine is in your friggin house instead of in some dimly lit laundromat where a hobo was just washing their armpits in the only available broke ass washer.

Dear Rob:
Why do people complain about life so much? Isn’t it what we make of it!

Great Question Selina,
Those people are what I affectionately like to call weak willed lambs for the slaughter.

Until that level of control is in our hands though, these macro events can really make micr-events in our lives feel like a kick to the jimmy.

I don’t fault the person who is unemployed for wanting to vent, I say though once that first cathartic release is out, divert bitch energy to fixing the situation energy. This goes for relationships…money…whatever…bitch, then immediately rectify. You might not find a job right away, but how about using this beautiful Internet to unionize that range. 1 million voices bitching about a common problem is louder than one in the real world and cyber space.

So why do these people bitch? Because they can in both desire and global platform, The question to ask yourself is, “Why do I listen?”